The Importance of saying NO

Peter was in a fix! While going through his agenda for the next day, he realised there would be no breathing space. His day was to begin at 5:30 am and end at 12 midnight! It was surely going to be a crazy schedule. After working out at the gym early in the morning, Peter had committed to a breakfast meeting with a few financial analysts. Post that, he had an important presentation to be done for the board of directors at office. This was to be followed by couple of back to back meetings with the Business Development and Marketing teams. These meetings stretched their original timelines and it was 7:00 pm by the time he left office. Peter had promised one of his friends Rahul, that he would accompany him for a Bollywood movie at 7:15 pm. Though Peter hated Bollywood movies, he couldn’t say no since Rahul was a very dear friend, and he did not want to disappoint him! The movie ended at 9:45 pm, and he had to rush for a family dinner. Peter’s cousin sister had flown down from the UK he did not have a heart to say no. By the time dinner was over, it was well past 12:30 am, and Peter slept at 1:30 that night. Guess what! Prior to dozing off, when Peter checked his agenda for the next day, he could foresee yet another demanding day – from 5:30 am to 11:30 pm!

This pretty much became a way of life for Peter, and it started taking a toll on his health. He was unable to pay attention to the more critical aspects of his life, since his knack of saying ‘yes’ every time would leave him no time for areas where he should have paid more attention. The problem with Peter was that he wanted to be nice to everyone every time!

Though it’s always good to be polite, saying ‘yes’ each time will make it easy for people to access our time at every possible opportunity, and they will continue demanding more of it. A fine balance needs to be drawn between the important and not so important activities, and then arrive at when it’s imperative to say ‘Yes’, and when it’s necessary to say ‘No’. To stay productive and reduce stress levels, we would all have to learn the gentle art of saying ‘No’.  “It takes effort to say no when our heart and brains and guts and, most important, pride are yearning to say yes. Practice.” ― Cole Harmonson 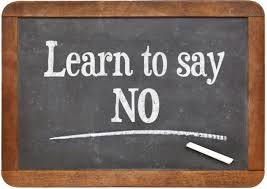 By carefully observing we can infer that having fewer matters on our plate results in completing our tasks with superior quality. We are better prepared to face our situations the next day, after catching enough rest and recharge our batteries.  If our lives become unorganized just because of not being able to say no, we wouldn’t do justice by helping others half-heartedly. As they say, we cannot help others unless we are able to help ourselves. The best example for this is an announcement the air-hostess makes before take-off. We are first asked to help ourselves with air masks when the pressure in the cabin gets low. If we ignore this command, we would be unable to help others with their air masks since we would ourselves be out of breath! However, there is a thin line of difference between saying no and refusing to help somebody in times of need. “Sometimes ‘No’ is the kindest word.”- Vironika Tugaleva 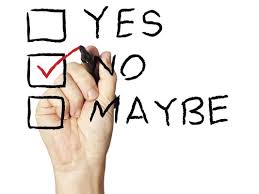 If we cannot say no on the face due to pressure, a gentle way of saying no is to keep it open ended and promise to get back with your answer soon. We could then say ‘no’ at a more appropriate time. Probably we could mention that post planning our schedule and giving it a thought, the particular activity/ task would not be possible right now. Most of us are ok with being told “no, thank you” — at least, compared to being told nothing at all. And if used in a kind, peaceful and respectful way, it may often leave the opportunity open to be explored again in the future when the timing is right. “Tone is the hardest part of saying no.”  – Jonathan Price

The greatest thing about the word ‘no’ is that it doesn’t mean ‘no’ indefinitely. It only means that it may not be the right time or the right opportunity for us to pursue at that moment. We are living in times where we have unlimited choices in life – be it career, food, fashion, entertainment, sports, politics, spirituality, education, cars, books etc. Hence it becomes essential to weigh our options and take informed decisions. One has to ignore and say ‘no’ to a few areas in order to excel in others. “Information overload (on all levels) is exactly WHY you need an ‘ignore list’. It has never been more important to be able to say No.” – Mani S Sivasubramanian

However, saying ‘No’ is not a piece of cake. It requires practice! We should begin by saying no to people who aren’t right for us. Start saying no to things we don’t wish to do. Finally graduate into saying no to senseless meetings, pointless seminars, mindless food or liquor, meaningless rage and regret. “Learn to say ‘no’ to the good and the advantageous, in order to receive the best.”  – Sunday Adelaja

Saying no might appear difficult in the beginning, as it may seem rude or cause ire and disappointment with our family/ friends/ colleagues. However, it’s a matter of prioritizing our lives by assigning preference to the most important tasks and saying no to the others. Ultimately we have to realize that we have more things to do than we have the time to do them in. At that point, we have to choose the activities on which we must spend our time. Accomplishment necessitates a refined blend of assertiveness and fearlessness. Deciding to say a ‘Yes’ or ‘No’ at the right moment exemplifies this. “Say no to everything, so you can say yes to the one thing.” – Richie Norton 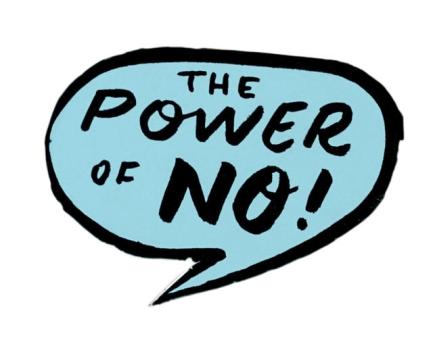 Since every situation is unique, it is best to evaluate the merits of each scenario and take a call if we  must go out of the way to help somebody if the person is genuinely in need. The emphasis of this article is not to say no to help people, but to organise our lives better by saying no to unimportant things so that we may achieve greater heights in our life. But while we harp on the importance of saying ‘No’, it should be complimented by saying ‘Yes’ to the important and necessary things. Let us pause for a moment and realize that a ‘no’ is not the end of the world. In fact, it could be a new beginning. So what would you say ‘no’ to today, in order to say ‘yes’ to something more important?

2 Responses to The Importance of saying NO